I finally slipped one past the goalie

During the great email fiasco of 2018, AKA 2 days ago, lots and lots of my email subscribers — who never got emails from me even tho they signed up to my email list — started suddenly getting emails from me.

See, I used to run sveral different email lists. And… last year I decided to just have one big list so everyone got the same emails from me every day.

And that’s when someone got all bent out of shape about getting an email from me after lo these many months of what he perceived to be radio silence.

Now theoretically, if I merged him from an old list into my main email list, this should never have happened if he never clicked on the confirmation link when he signed up.

But… maybe I messed up somehow by pushing the wrong button and this is all my fault. It’s possible. I’ve screwed up stuff like this before.

Either way, this one slipped through the goalie.

What’s funny about all this is that I set up roadblocks and boarder security to keep this from ahppening… like, making you tick a checkbox acknowledging that you are signing up to an email list and that you’ll receive promotional stuff from me.

I also send out confirmation emails so the unserious folks don’t get onto my email list.

It’s not exactly a wall, but I also don’t have an “open boarders” policy.

Anyway, never let it be said that I am never diplomatic (see screenshot below): 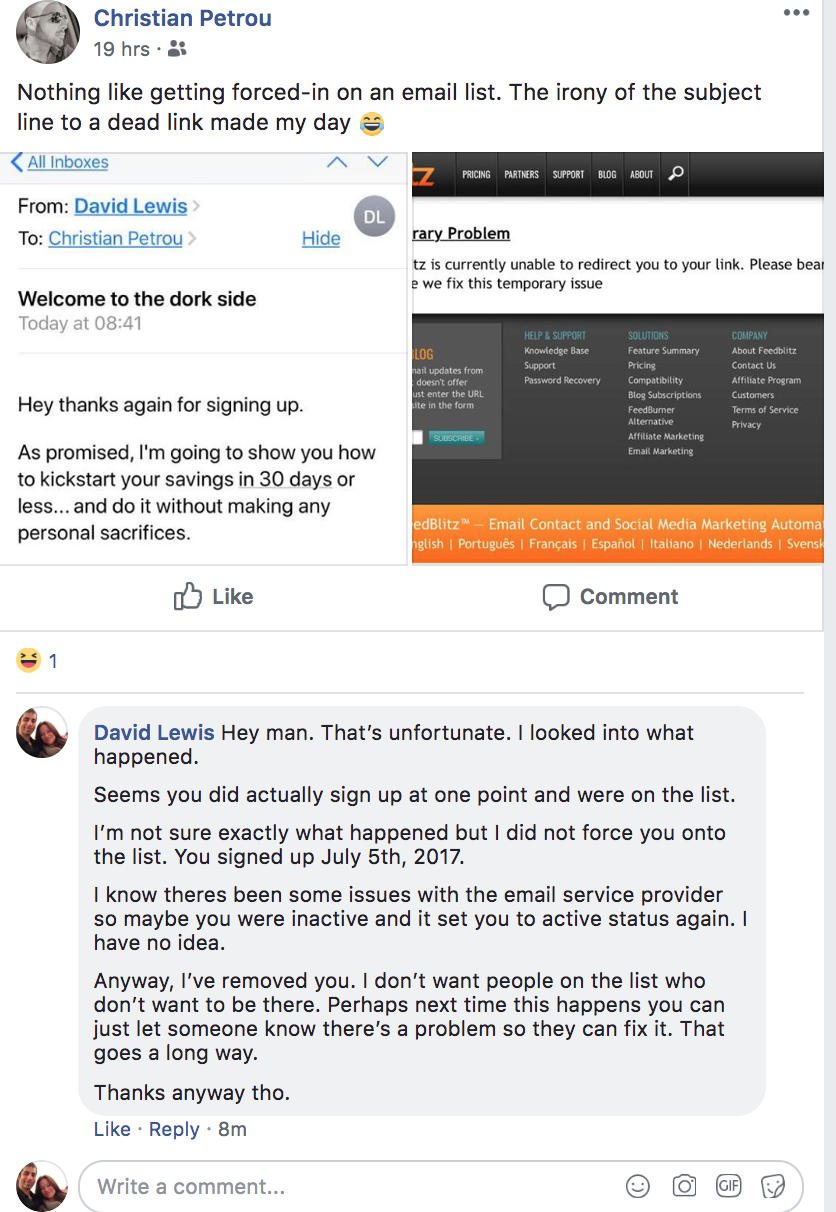 The funny thing is the email he screen-capped is an email from about a year ago (which no longer exists and so the email link is dead because it points to a page that no longer exists). But, his Facebook post was time stamped 18 hours ago when it popped up in my feed.

Anyway, the point of all this is there are some people who just don’t belong on this email list and it’s not because they’re Facebook drama queens who desperately need attention. Although, there definitely are some of those.

No… there are lots of totally legit reasons why someone might not do business with me.

Maybe they already have boatloads of money and are just living the dream. Maybe they are the one person who figured out that “one weird secret” to making mad moolah from home, sitting in their underwear, at the kitchen table.

Maybe they don’t place a high value on their income and savings and so they don’t see the point of life insurance. That might sound cray cray to you but… there are a shit-ton of people in this world who couldn’t give a rat’s ass about it or what happens to them, let alone their ability to produce something valuable.

Whatever the case, I am not a good fit for some people… maybe a lot of people. And, if for whatever reason they find it difficult to click the unsubscribe link at the bottom of every – single – email – (which does work, and has always worked, if you want to try it out) and I can help them get off this email list, then… I will help them get off the list.

I mean. Really. No one wants to be hounded with offers they don’t want.

Anyway, enough about the poor and unfortunate Mr. Floyd. Let’s talk about the rich and prosperous Mr. Butch.

If you are not on this email list by accident, and…

… assuming you DO actually want to be here, and… you do not yet have a savings plan, or… if you HAVE a savings plan but you’re not satisfied with how it’s working (or not working, as the case may be), then…

This post brought to you by //The Rogue Agent//. David has been a life insurance agent, and worked with some of the oldest and most respected mutual life insurance companies in the U.S., since 2004. Learn more about him and his business, here.