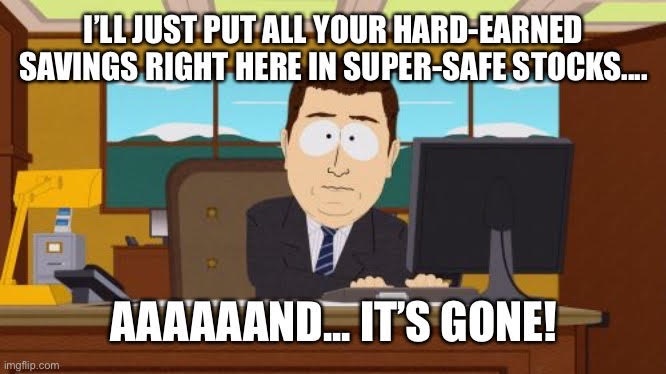 There’s a certain sense in which stocks have always been a casino. People endlessly speculate on “the next big thing”. They hope a company has some “killer app” that will change the world for the better, and they hope they can be the investor that invests a small amount of money and suddenly strikes it rich.

So, it’s understandable why index funds became so popular. Plenty of people have felt the sting of mutual fund fees and the frustration of a failed speculation.

What’s not to love?

Low fees, strong historical performance. It’s endorsed by the most successful investor of our time — Warren Buffett. More than that, index funds are seen as a low-risk way to invest your savings and get a stable return over long periods of time.

Who needs insurance and risk management strategies when you can index all the things? Let the suckers pay for protection.

The idea of the stock market as a magical return-spewing machine isn’t new, and the justification for this viewpoint comes from the idea that historical returns of the market are predictive of future returns. Even if investment advisors and financial planners explicitly deny it, their financial plans implicitly hinge on these assumptions. The main reason people assume 8%, 10%, or 12% returns from the stock market is because there is this idea floating around out there that the stock market has grown at this level. But, it really depends on the time period you're looking at.

As one Redditor put it:

Keep in mind, there's no free lunch in investing. You can't get more return without increasing risk. At least that $260,000 after ten years is virtually guaranteed.

But, for some reason, index funds get a pass. No one perceives them as being risky.

Index fund investing has become so popular and so pervasive, that the perceived risk of stocks has almost completely vanished. When you talk to a lot of young investors these days, they don’t even believe in equity risk — not really. At least, not until just recently.

This belief hinges on a flawed premise… that historical growth is predictive of future growth.

That historical growth is typically only valid over long periods of time and is highly sensitive to the time period studied. And, average historical growth often hides long periods of negative compounding caused by market corrections, investment fees (however small they may be), and taxes. It gives investors a false sense of how the stock market works and the reliability of historical returns in predicting future returns.

The reality is… it isn’t.

Yet, from 1947 to 1967, we see example after example of the kinds of gains the stock market is famous for. Between this time period, the compound annual growth rate mushroomed to 14.2%. This is what people think of when they think of the stock market. The great bull run that came on after the 1970s radically changed how people looked at stocks. From 1980 to 1999, stocks grew at a compound rate of 17.99%. This seemed like the new normal. When you look at stocks in the S&P500 from 1926 to 1999, you get a compound annual growth rate of 11.39%. This seems totally legit to any investor from the ‘80s and ‘90s.

But, from 2000 to 2018, the compound growth rate of the market was just 4.83% — that’s including reinvested dividends. Even if we include a few previous years positive growth, the 20 year return of the S&P500 is only 6.59%. Again, that’s with dividends reinvested.

The question answers itself.

And yet, financial planners, the financial news media, and popular financial bloggers still beat the drum of low-risk index funds driven by predictive historical returns. To be fair, one could change the time periods and come up with a different result, but isn’t that the point? Market returns change each year. History isn’t predictive of those changes.

Sure, investors could see a reversion to the mean over another 20 years. But, 20 years is a long time to wait. Investors who start plowing money into their 401(k) in their 40s will be nearing retirement. Will the stock market be able to bail them out of a low savings rate if they banked on an 8% or 9% return?

We don’t know, but maybe we don’t have to know.

The late actuary Jeremy Gold — the man who predicted the pension crisis over 25 years ago, once quipped,

$1 million of bonds has the same value at $1 million of equities… Consider a $1-million portfolio of 10-year zero-coupon Treasuries yielding 5% annually, and a $1-million portfolio of equities expected to return 10% annually. They have different 10-year expected values, $1,629,000 for the Treasuries and $2,594,000 for the equities. Yet, the present values of the returns of the two portfolios, when correctly discounted to reflect risk, are equal, because the value of a portfolio must equal the value of its returns.

Gold understood the obvious… that money has the same present value, adjusted for risk, regardless of where it’s invested. The difference between stocks and bonds is not its present value, but rather its future expected value. But, the only value we can know for certain is the present value of future savings based on a “riskless rate”. The mistake, then, seems to be the financial industry equating a potential with an actual, or treating a potential expected value as being riskless (or at least, low risk) when it’s not.

Gold was commenting on pension plans, but his principles apply to all retirement and savings plans. The high assumed rates of return have caused millions of Americans to radically underfund their 401(k) and IRA plans and, in the process, simultaneously exposed them to tremendous risks.

An investment operation is one which, upon thorough analysis, promises safety of principal and an adequate return. Operations not meeting these requirements are speculative.

Graham is often cited as the investment expert’s expert and his advice and writings a defacto endorsement of stocks. But, it was Dr. Solomon Huebner who made this same observation in his book, The Economics of Life Insurance and again in 1923, in Life Insurance Savings as Compared with Other Forms of Savings where he wrote,

lnvestment represents the placing of savings to some use which will bring in an income without failure, at the same time leaving the principal entirely secure against loss… In comparing the life insurance method of saving and investment with that relating to stocks, it is highly important to bear in mind that a stock is never an investment but always a speculation. A stock certificate may be defined as a receipt, certifying that the holder thereof possesses the privilege or participating in risk. No promise whatever is made as to the payment of a cent of dividend or the return of a dollar of principal.

Huebner also noted in his textbook, The Stock Market,

Stocks are inherently speculative in character. Bonds are credit instruments and, with few exceptions, give a definite promise as to the payment of interest and the return of the principal, although in many instances the promise turns out to be impossible of fulfillment. Stock certificated, on the contrary, promise nothing at all. They merely constitute an evidence of ownership, a certification of the holder’s privilege to share in risk, that is, to participate in the varying fortunes of the business enterprise.

Graham’s definition of an investment is eerily similar to Huebner’s earlier formulation of that idea, and yet the understanding of the inherent risk in stocks stocks seems to have been lost, and in fact today’s investment advisors and the general public seem to believe stocks carry very little, if any, risk at all. Investment professionals flock to Graham as their savior, not Huebner, because Huebner promoted thrift and savings through whole life insurance, not speculative investments.

But, the underlying ideas of both Graham and Huebner are as true today as they were then. Stocks are a share of ownership in a business. Businesses are, generally speaking and with few exceptions, speculative in nature.

Where Graham and Huebner differ is in their assessment of that basic fact. To Huebner, stocks are not investments in the sense that principal is not protected and there is no promise or reasonable expectation of any income at all. Even established companies become speculative endeavors when they introduce new products and services. And even for dividend-paying stocks, the dividend itself can become speculative.

The fact that this is rarely, if ever, acknowledged by professional investors, let alone financial planners and investment advisors, financial bloggers, news anchors, and the financial media at large, is a demonstration of the total failure of the financial services industry to properly educate the public about the nature of its business and services. Is it any wonder that individuals find it difficult to save money and that financial literacy initiatives routinely fail? People are taught that equity risk is largely illusory and that the stock market is the source of stable investment for the majority of Americans.

This is demonstrably false.

Study after study shows that investors routinely take substantial risk and make paltry returns — even index fund investors. And, the risk of loss, even from cheap index funds, increases substantially in retirement.

For example, if an investor banks on the conventional wisdom of using a 4% withdrawal rate in retirement, but that withdrawals rate assumption is further predicated on earning 8% annual returns in their equity investments, a 5% return in those equities will devastate the investor and cause them to run out of money (or force them to make huge sacrifices in retirement that they cannot afford).

The solution is radical, if not practical. Take a step back and rethink the idea of “stocks for the long-term.”